Frank & Oak Keys In On Acquisition With SourceKnowledge 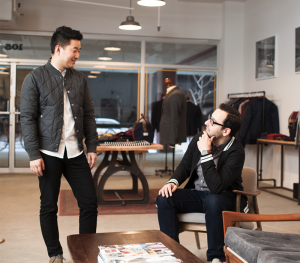 Frank & Oak, a leading e-commerce company that Fast Company listed as “one of the most innovative companies in retail”, partnered with SourceKnowledge to create a cross-media hybrid brand/direct response campaign.

The challenge was to deliver a brand-forward narrative to a target an audience of millennial males, and optimize the campaign to drive acquisition, increase average order value, and conversion rate. The goal was not just to find more customers – but to find better customers who would buy more often, and for greater value.

The campaign used a variety of ad formats including 15s and 30s pre-roll, autoplay, and skippable that were geographically targeted to North America. Creatives were A/B tested and delivery was optimized to factor conversion rate and acquisition value using dynamic cross-media remarketing, lookalike modelling, and SourceKnowledge’s performance analysis engine. Engaged audience members were ranked on likelihood and potential value of conversion and then served additional creative to reinforce the desired behavior. Opportunities were identified across devices and served sequential cross-media assets to increase the campaign’s reach and effectiveness.

SourceKnowledge’s optimization insights provided Frank & Oak with a baseline for effective practices in running a lean, data-driven campaign. That same data provided a clear roadmap as the brand continues to optimize campaign dollars against acquiring new users with a higher average order value. SourceKnowledge’s platform captured insights and metrics showing the power of their cross-media solution.

SourceKnowledge delivered 3.5M impressions that were targeted to M18:40 in North America. Individuals who had been exposed to the video creative first were 84% more likely to engage with a sequentially displayed ad unit than the control group. In post-campaign analysis, Frank & Oak was able to determine that site members who became purchasers through this campaign spent 20% more than site-wide AOV (average order value). Users who created accounts through this campaign were 10% more likely to purchase within a one month period.